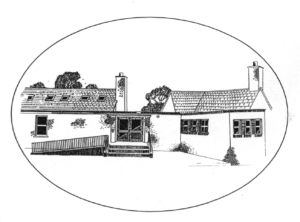 Saint Michael’s N.S. enrolled its first pupils in November, 1882 and became part of the National School system in January 1885.  At this early stage the school was comprised of a two-roomed building with 34 girls and 43 boys on roll.  Many of these pupils had never been to a national school before, having been educated at home or at private schools.  Others came from The Model School or Saint Munchin’s School.

The school fees in 1885 were 6 shillings and this increased to 8 shillings the following year.  Subjects taught were Reading, Writing, Spelling, Grammar, Geography, Book-keeping, Geometry and Mensuration.  Girls attended Needlework Classes, while the boys were taught Agriculture.

The school was located on the present site at 11, Barrington Street and was extended in 1953, 1964 and 1968.  Later in 1968, Villiers Primary School amalgamated with Saint Michael’s N.S.  Numbers of pupils increased over several years, and by 1971, it was a five-teacher school.  In 1976, it reverted to being a four-teacher school.  The present classrooms were added in 1984, giving the school four classrooms, a resource room, a gymnasium/hall, library, staff room, office and storage rooms.  The numbers have risen steadily during the last decade, and there have been five mainstream class teachers since September, 2008.  Since 2000, the Department of Education & Skills (DES) has invested in teaching and ancillary staff for Special Educational Needs (SEN) and English as an Additional Language (EAL) pupils. 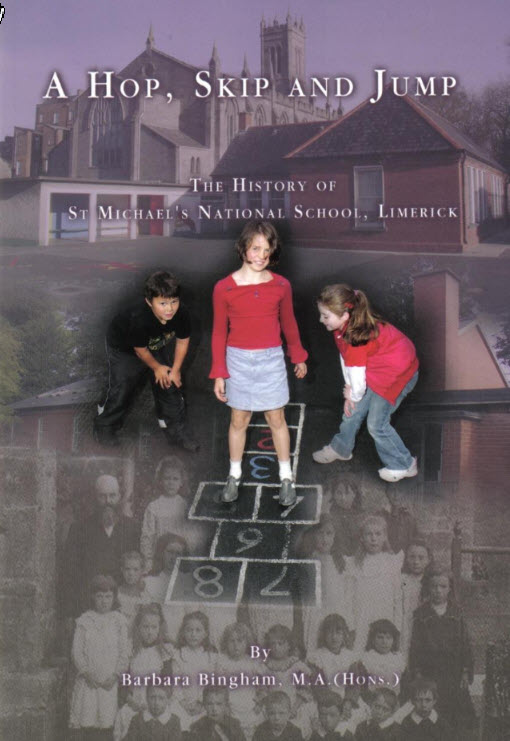 A Hop, Skip and Jump

In 2002 Karen Long Eacrett embarked on a fundraising mission in an effort to assist in the refurbishment of the school building. She began by reviewing old roll books as she had planned to contact past pupils of the school for support. It became clear to her very early on that the historical value of the information in the roll books was immense and she felt that it would be a shame not to record it. A committee was formed with Karen taking on the role as Chairperson and they set about to develop a the living history of Saint Michael’s N.S.

One committee member in particular, Barbara Bingham author of the book, did trojan work. She complied the history using primary source material , published works and a lot of anecdotal content. The printing of the book was generously sponsored by Shaws Brand and Dairygold Consumer Foods.

The book is now available to buy from the school directly. 100% of the profits will go to the school which will be used to fund field trips for various classes throughout the school. Please contact the school office if you wish to purchase a copy.

We use cookies on our website to give you the most relevant experience by remembering your preferences and repeat visits. By clicking “Accept All”, you consent to the use of ALL the cookies. However, you may visit "Cookie Settings" to provide a controlled consent.
Cookie SettingsAccept All
Manage consent

This website uses cookies to improve your experience while you navigate through the website. Out of these, the cookies that are categorized as necessary are stored on your browser as they are essential for the working of basic functionalities of the website. We also use third-party cookies that help us analyze and understand how you use this website. These cookies will be stored in your browser only with your consent. You also have the option to opt-out of these cookies. But opting out of some of these cookies may affect your browsing experience.
Necessary Always Enabled
Necessary cookies are absolutely essential for the website to function properly. These cookies ensure basic functionalities and security features of the website, anonymously.
Functional
Functional cookies help to perform certain functionalities like sharing the content of the website on social media platforms, collect feedbacks, and other third-party features.
Performance
Performance cookies are used to understand and analyze the key performance indexes of the website which helps in delivering a better user experience for the visitors.
Analytics
Analytical cookies are used to understand how visitors interact with the website. These cookies help provide information on metrics the number of visitors, bounce rate, traffic source, etc.
Advertisement
Advertisement cookies are used to provide visitors with relevant ads and marketing campaigns. These cookies track visitors across websites and collect information to provide customized ads.
Others
Other uncategorized cookies are those that are being analyzed and have not been classified into a category as yet.
SAVE & ACCEPT